WINS DOXA FEATURE DOCUMENTARY AWARD MAY 12 2012
JURY REPORT:
” We admired this film for its poetic imagery, its honesty, its rigorous intelligence and its modesty. We admired it for the beauty of its images and the way it managed to articulate the particular and the universal simultaneously. It’s a film that is not afraid of, nor does it pathologize, the burdens and sorrows of being human. It’s honest and moving in its grief and rises in the end to expressions of joy. It’s a film that seeks out gentle words and ceremonies to articulate the experience of all women, and indirectly, of their sons. And, as in many memorable documentaries, the relationship between the filmmaker and, in this case, her subject, develops into a mutual exchange, a complex and intimate sharing of the experience and the moment. A portrait of multidisciplinary artist Tomoko Mukaiyama, the installation of 12,000 white dresses in a rural Japanese town, the biological cycles of life and death, and a mature and forgiving meditation on the great unanswerable questions.”

A portrait of a Japanese pianist who is also an innovative visual artist and a meditation on what it means to women to be (in)fertile. A courageouss approach to a subject that remains a taboo, which deepens our understanding of the relationship between body and mind.

Jury report Dok Leipzig:
“This is a finely wrought auteurist documentary that combines several complex elements. It is a portrait of a Japanese pianist who is also an innovative visual artist. And it is a meditation of fecundity, childbirth and the experience of menstruation. We applaud the filmmakers’ audacity – her courageous approach to a subject that remains a taboo in many cultures. She explores it with an elegance and sophistication that deepens our understanding of the relationship between body and mind.”

‘Reserved and breathtakingly intimate (…) a majestic epic about motherhood, miscarriages, menopause. (…) In a both searching and self-confident manner of discovering and watching, the film penetrates into what is probably still one of the greatest of taboos, menstruation, and, as a consequence, about what femininity and being a woman mean.’
Dana Linssen, NRC Handelsblad
4 stars out of 5

‘An unforgettable, claustrophobic film (…) as sensuous as Werner Herzog’s early work, or everything by Terence Malick, especially his latest film Tree of Life. All these films explore the meaning of universal themes around life and death, birth and degeneration in a visual, poetic way. Watching it represents in itself a ritual, almost a kind of mourning, or an extended moment of the sublime.’
Gawie Keyser, De Groene Amsterdammer

‘With Water Children, Aliona van der Horst, has created a film that is first and foremost an experience. You have to feel – and watch. Listen. Everyone who undergoes this film has to be able to see their own story or that of acquaintances and friends reflected in it.’
Floor de Haas, Neerlands Filmdoek 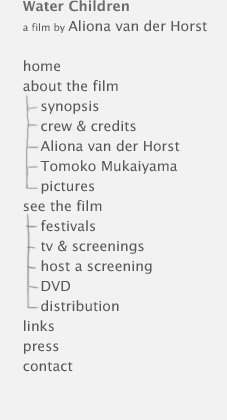